I admit, I didn’t pick up the second clue until Saturday night. But, I did finish the entire clue that night! This German Short Row Heel did take me a couple tries which meant I had to ripe it back a couple of times. I wish the author would have said to practice before attempting this since it takes a couple times to get use to what you are doing.

I had meant to start my second sock last week but life got in the way. Hopefully, with the extra time this week, I will be able to start the second sock. How is your KAL sock coming?
Second part of the KAL: Cableship – Part 2

I decided that since I have been a knitter for well over ten years and I have not done a single knit along (KAL), that this was despicable and I just had to do something about it! My local knitting group informed me that Knit Purl Hunter does some amazing KALs and will be releasing a new one very soon. So I quickly went to her website, summed up what supplies I needed, and was off to the yarn store.

I fell in love with this Zauberball color because it reminded be of my elementary school days. I thought, “How fitting for my first KAL!” I was fortunate enough that my local yarn store was offering ten percent off any knitting supplies for this KAL. I know some knitters will cringe while they read this, but I stopped by my local Joann Fabrics to pick up two circular 30″ needles of the 2.75 mm size.

Side note: My husband lost his job back in May and with me still being in school, I just cannot afford the luxury of Addi Turbos

knitting needles right now. But I look forward to the day when I can knit with ease on those sweet babies again!

Anyways, I waited anxiously for October 6th to arrive so I could start these socks because I have never knit socks toe up before. I always knit from the leg down to the toes. As soon as the first part of the pattern was released, I was off to the knitting races (so to speak). I quickly found the pattern to be well written and fairly easy for a new or advanced knitter.

I finished my first sock this past Sunday. I plan on finishing the second sock by this Thursday when the second part of the pattern is released. By the way, it is not to late for you to join in on the KAL!

Further size adjustment may be made by changing needle sizes.

Last summer, my husband and I explored a new yarn store. From a person who really only saw Joann Fabrics as my go-to place for yarn, I was floored by the beautiful, rich colors and hand-dyed options for yarn. My husband even fell in love with a hand-dyed sock yarn that he was willing to pay $36 for and did not have to come out of my craft budget!  😀

I found and bought two skeins of sock yarn by from Schachenmayr called Regia Pairfect that I was determined to make for myself. Well, a year has passed, and I am finally getting around to these two skeins of yarn! I decided to knit the Regia Pairfect wood color skein first. I was drawn to the pinks, purples, and blue in the yarn.

Well, lets just say, it has pretty much taken me the entire month of June to get one sock out of the pair done … and I still need to finish the toes on the first sock! 😈 Even more frustrating, this sock has been ripped out and redone 5 times this month! I have come to find out that I have VERY, very narrow feet. This last time, I only put 48 stitches on the needless! Then, to the brown strip right before the heel, I decreased every 12 stitches to give me a grand total of 42 stitches. Not going to lie, I felt like I was knitting a child’s sock for my own feet!

I am finally down to decreasing to the toes and I found out I do not have the right size DPNs to finish the sock at the moment, so I just started on the second sock.

But, I am so glad that I found a Ravelry pattern from a book called Top Down Sock. I saw some comments from users (under the projects tab) which helped aid my mental sanity in ripping out the sock one more time and casting on once again. My husband on the other hand, looked over and said one word, “Again?”

I plan on buying the book for future needs. I could not buy the book this past weekend, when I truly needed to glean the wisdom, because my husband and I were up in northern Minnesota at the cabin celebrating our first wedding anniversary. I will let you know what I think once I get the book. 🙂

I love to make socks for my husband. Yet, the most disappointing part after finishing a brand new pair of knit socks for him is when he comes to be a day or two later to show me the bottom of his socks and they has already worn through! His answer is always, “All I did was just wear them, you cant be angry at me for that.”

So finally, last year, I decided to start the adventure of designing socks that would give me a “few” extra days of not having to mend the bottom of his new knit socks. Since I am new to patterns, I decided to not charge for this even though it took lots of my time to design. Please feel free to leave comments or questions. 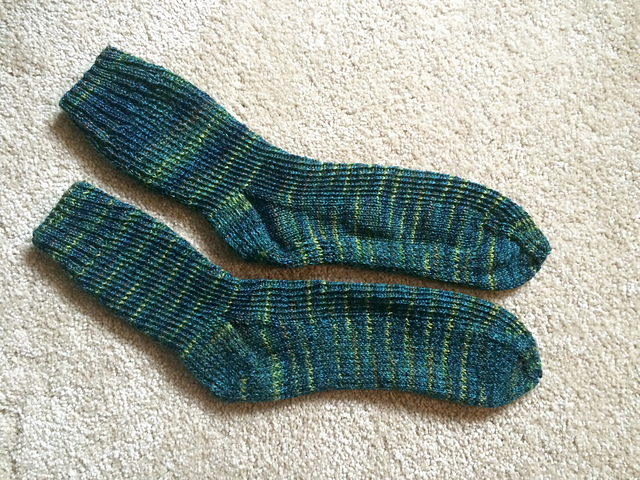 Cannot wait to see your progress on Ravelry!

I use Addi Turbo 12″ Circular Needles size US 0.

CAST ON | 64 stitches using the German twisted cast on.
CUFF | *K2P2* for 4 inches.
LEG | *K1P1* for 5 inches
HEEL FLAP | Separate the 64 stitches in half, with the first 32 stitches staying on the needles. Place the last 32 stitches on a stitch holder. Repeat the following 2 rows for a total of 26 rounds and ending with a purl row.

I repeat decrease round then constant round until I have 60 stitches.

FOOT | Repeat constant round from gusset until 2 inches before toes.

TOES I remove my first and second stitch markers and only use the third and fourth from now on. Using Joan’s favorite toe pattern:

Then work only decrease round until you have 16 stitches on the needles.

BIND OFF | Use the kitchner’s stitch on the 16 stitches. Weave in the ends. (Click here for a great video on how to do both!)

Today, I finished my P3 year of pharmacy school. Tomorrow, I start my first day of a year filled with month long rotations. I am excited because this means I will have more time to knit!

Since the last time I wrote a blog post (aka July 2015), all I have made was my first shawl and a couple of dishcloths. My goal is to at least update once a week with my current knitting adventures during my P4 year of pharmacy school. So stay tuned for some future escapades! 😉